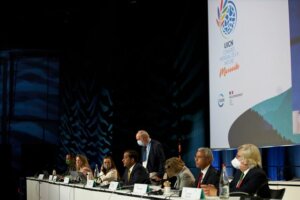 We are pleased to announce that a member of Three Stone Chambers Professor Surya P. Subedi QC, OBE, DCL has been appointed by the Bureau of the IUCN Council as Legal Procedural Adviser to the IUCN World Conservation Congress 2021.

The International Union for Conservation of Nature (IUCN), which is also known in short as the World Conservation Union, is a prestigious international organisation. Professor Subedi was appointed to advise them on legal and procedural matters during their World Congress which takes place every four years. This year the event took place in the French city of Marseille between 3 – 11 September 2021.

The Congress was inaugurated by French President Emmanuel Macron. A number of other heads of states or governments also addressed the Congress. Professor Subedi attended the opening ceremony, as well as the full proceedings of the Congress.

IUCN is a membership Union composed of both governments and civil society organisations. It harnesses the experience, resources and reach of its more than 1,400 member organisations and the input of more than 18,000 experts. This diversity and vast expertise makes IUCN the global authority on the status of the natural world and the measures needed to safeguard it.